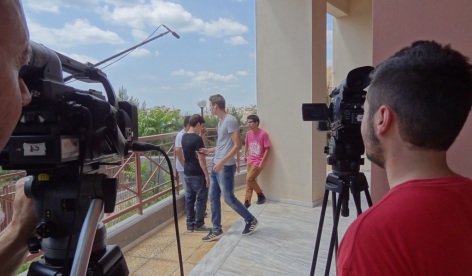 Just before the end of the school year, members of the Cinema Group of the 1st Lyceum of Keratsini had a unique experience

The team, with Camera Zizanio initiative and with the help of the great cinematographer (D.O.P) and director, Nikos Kavoukidis, had the chance to shoot their new film with absolutely professional standards.

The film had demanding shootings both indoors and outdoors, day and night. The filming lasted for two days, from morning until late at night. Youngsters had the generous help as far as material means (high definition cameras, lights, microphones, etc.) are concerned and the knowledge offered by Nikos Kavoukidis and his colleagues. The editing was made at a professional studio.

This unique experience is captured by one of the school’s teacher.

“It is difficult to describe the experience of these two amazing days, but one thing is certain. The youngsters and the teachers, who were involved in the filming, were filled with uplifting feelings, that we experience only a few times in our lives.  “There is no tiredness if it’s about something that you really like”, said someone who out of curiosity came to see what we were doing.

Neither Mr. Stathis, a school guard, considered the time and was present even during the evening shootings, as he enjoyed events like this one.

We all had the feeling that we were lucky to be there, shooting our own film, with Mr. Kavoukidis asking us «guys, what you want to get from this shot” and “how you want to tie them  together” (youngsters had a decoupage ready). At the same time, approaching a school film in a professional way with courses for the use of axis, lights, sound etc even for filming pigeon on the street. We’ve learned so much during those 15 hours of filming.

I do not know if it’s going to be a good film, but our soul was brightened and our ties were strengthened. Therefore we would like to thank much Mr. Kavoukidis, Mr. Theodosiou and their partners.  Students and teachers understood the magic of cinema, the magic of art and at the end of shooting,    in the night real life Avenue Schistou. “

Let’s not forget to mention that Nikos Kavoukidis, a veteran filmmaker, has a special love for the young generation and he generously offers his help. Thus, within the frameworks of Camera Zizanio, the ” Nikos Kavoukidis award” has been established, where the lucky winners have the opportunity to experience unique moments, like youngsters from Keratsini had.