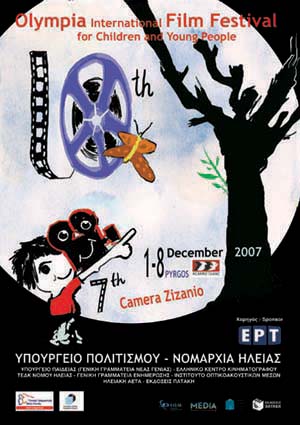 The 7th edition of Camera Zizanio (European Meeting of Young People’s Audiovisual Creation) took take place from December 2 to 9, 2007 in Pyrgos, along with the 9th Olympia International Film Festival for Children and Young People.

Its seventh realization finds Camera Zizanio with a higher number of participants and a wider ranger of activities:

The novelties of this very dynamic sector of our Festival are the following:

One more festival gone by, a cinematic fortnight and especially the last week of the main screenings, successfully behind us now, with more unique moments added to our lives!

Yet another fantastic awards ceremony, with the birthday cake delivered by children from all over the world, singing Happy Birthday to Dimitris Spyrou in their languages, and a fantastic program with songs from Hatzidakis and Theodorakis!!

The Zizanio awards funny as always, made us all laugh!!