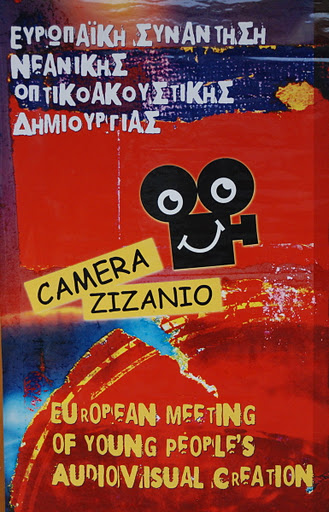 The first and foremost characteristic of the 11th Camera Zizanio is the number of entries from Greece. This year they have reached 72, a considerably larger number compared to last year! Even though quantity is not a factor in artistic creation, in this particular case it is essential.

With the lack of existence of any kind of central audiovisual education program in schools and the non existent support, the production of artistic works in a school environment requires strength and in effect, constitutes a feat on the part of students and educators. At the same time, it is a source of optimism. Young people just don’t give up!

Considerably more, compared to other years, is the number of films produced by elementary education schools, while small, but constantly expanding, is the presence of films created in kindergartens!

As to the content of the films, the subject matter varies but nowadays, it also includes direct references to the current financial crisis, the events that took place in Keratea, immigrant children, their fears and expectations.

The European Section of Camera Zizanio, in which almost all European countries are represented, for the first time, expands to the Mediterranean countries, since we have the pleasure to include children creations from Occupied Palestine, Lebanon and Jordan. This opening, of course, has coincided with the political and social explosions in the area and limited a much wider participation.

From the rest of the world, in the International Panorama Section, we will get a taste of young audiovisual creations with films from Asia and America and in particular from USA, Brazil, Korea and Bangladesh.

The cinematic workshops, one of the most dynamic part of the Festival, will be enriched this year mainly with the participation from educators from abroad, in particular Italy, Serbia, Holland and a very rich film production is expected.

And something new: the team of the Zizanio News youngsters has designed and is responsible for realizing “The Mythos Project” a project that involves all the people from abroad that will be in Pyrgos during the Festival and will create a collaborative film that will reflect the current situation in our country through the eyes of foreigners.

The cooperation with the Greek Ombudsman, one of the most important institutions that have been created the past years, is continuing this year as well, and will effect in an award to a film with social sensitivities.

Finally, a new cooperation that Camera Zizanio and the Olympia International Film Festival have achieved opens wider options to young creators: the films that will win awards in the 11th Camera Zizanio will travel to Paris, in order to take part in the European Independent Film Festival (ÉCU) which will take place from the 30ieth of March to the 1st of April 2012.