On Saturday December 10, a magnificent closing ceremony marked the closure of this year’s festival. It took place at the Conference Center of the Ilia Prefecture in Pyrgos and, among other things, it revolved around the awards for the 19th Olympia International Film Festival for Children and Young People and the 16th Camera Zizanio.

It was a cheerful night in a crowded auditorium, with the evident presence of numerous Greek and other European youngsters. Popular as ever, Camera Zizanio, awarded plenty of prizes to little directors from all around the world, who had worked either individually, or collectively (through their schools and even kindergartens!)

The prizes were abundant for the Greek students, too – some of them won by 10 year old kids who debuted in the field of film-making with imaginative movies, like the one by Artemis Kalantzakou, starring a real life snail that is travelling around the world on a map!

The refugee crisis inspired a lot of schools, while Mr Nikos Theodosiou, the artistic director of Camera Zizanio, highlighted the festival’s and our own responsibility to “offer much more to the kids of the world”.

As a constant supporter of the festival and young students taking their first cinema steps, the renowned director of photography and director Mr Nikos Kavoukidis, underlined the need of the festival to be given a new, larger screening room, since (due to its huge appeal) the current one is not enough.

The festival’s president and Deputy Head of the Western Greece Prefecture, Mr Giorgos Georgiopoulos, distinctively noted: “when a country is deep into crisis, but its children produce culture, it is certain that this country will survive”. He also referred to the – long awaited – solution to the garbage issue of the area by the Mayors of Pyrgos and Amaliada, who “managed to bridge the gap that divided those two cities, with the help of culture”.

Last, but not least, the Head of the Western Greece Prefecture, Mr Apostolos Katsifaras, praising the importance of the Olympia festival, accentuated how it constitutes “a great chance for us and the whole country”, comparing the festival to “our childhood friendships. You never forget them…”.

Mr Vaggelis Politis-Stergiou, the counselor of the Minister of Culture, Mrs Lydia Koniordou, was also present and had for years been a member of the festival’s organizing committee.

This year’s event was one of the most successful in the latest years. The Olympia Festival, with the tireless Mr Dimitris Spyrou at the head of it, managed to turn Pyrgos into an endless film setting with children having the lead roles.

Everyone promised to return next year, same period, to celebrate the 20 years of the Olympia International Film Festival for Children and Young People and the 17 years of Camera Zizanio. 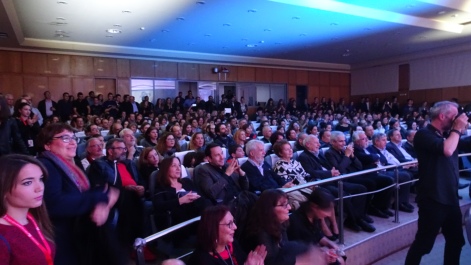 2016, ΝΕΑ
← “EVERYTHING FOR THE CHILDREN!” Public Policy Status of Media Literacy in Greece →