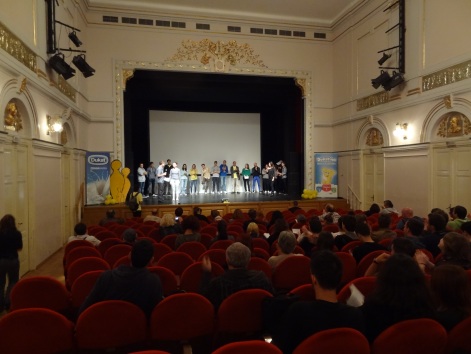 Youngsters’ creations from Greece, with Camera Zizanio’s initiative, continue their great journey all over the world. This time, the destination is Croatia and specifically… two film festivals.

Dubrovnik Film Festival 2013, is a festival of youth films from Mediterranean countries, that will take place from October 17 to 20, 2013, in Dubrovnik. The following films were selected:

In the 6th Four River Festival, and international festival with films made by children and youngsters, and was organized in Karlovac (September 11 – 14, 2013), we had one more Greek participation.

It’s about the film that was created by the students of the 15th Primary school of Athens: “Our hands are not for hitting“.

In a few days, we’ll announce who will be the Greek winner of the Media Litteracy Award, in Austria, that will win a trip to Vienna.

Those who want to give themselves the opportunity to experience of a youth festival abroad, they only have to make the first step: to send their films at the 13th Camera Zizanio, that will be held from 30 November to 7 December, 2013.