The catalogue of 19th edition of Camera Zizanio is  now available online!

The 19th Camera Zizanio has arrived!

19th Camera Zizanio will take place at Pyrgos, Peloponnese, Greece from November 30 to December 7, 2019 along with the 22th Olympia International Film Festival for Children and Young People.

Τhe submission deadline of the great European feast of young people’s audiovisual creation- Camera, is on October 4th, 2019. Don’t miss it!
The 19th edition of Camera Zizanio will take place from November 30 to December 7th, 2019, in Pyrgos (Peloponese) along with the 22nd Olympia International Film Festival for Children and Young People.
Childen and young people up to 20 years old can submit their fiction, documentary, animation and experimental films, duration up to 10 minutes. We have 3 competition sections: Greek, European, International.
Young creators will have the opportunity to attend the Festival, take part in film seminars, Mythos Project multinational workshops, visit the archaeological site of Ancient Olympia and experience Festival’s unique atmosphere along with other young filmmakers from Europe but also from the rest of the world.
Please read the regulations and fill in the entry form here.
For any further information you can contact us through camerazizanio@gmail.com and tel: 0030 2108664470 (Athens), 0030 2621026890 (Pyrgos).
2019, ΝΕΑ, NEWS

Everything can happen in the blink of an eye! 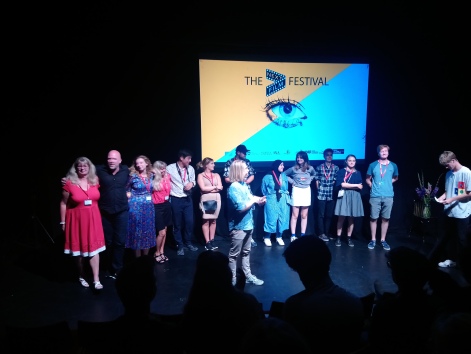 “Everything can happen in the blink of an eye!” was the slogan of the recent TheNextFilmFestival for young people under 21 years that took place at Odense of Denmark during 27-30 of August.

The days of the festival passed quickly full of speeches, seminars and workshops for the young filmmakers but also for us the film educators, because good educators need good teachers! Between the educators was the two-times Academy Award winner film director Martin Strange Hansen and the outstanding director Thomas Vinterberg who together with Lars von Trier and others, created the famous Dogme 95 Manifest and its “Vows of Chastity”, well-known for the emblematic film of Dogme 95 The Celebration (1998)  and three times winner at Cannes Film Festival.

From the competitive part of TheNextFilmFestival stays alive in my memory the freshness and at the same time the maturity of the cinematic discourse articulated by the participation of young people around the world.

Besides all these at Odense we were welcomed by another festival, the Odense Film Festival, Denmark’s oldest international festival since 1975 and partner of TheNext FilmFestival. So we watched as many films as we could from the competitive program of animation, fiction and documentary!

Me and the young talented Panagiotis Christofleas who participated in this film festival shared knowledge, concerns and made friends who share the same love for cinema.

Thanks to Camera Zizanio and the Olympia International Film Festival for Kids and Youth for this unforgettable experience!

I will close this brief review with the words of the festival’s soul, the unique Nisse Koltze, who urges us to open our eyes and see that the world is still wild, beautiful, dangerous and exciting!

Error: Twitter did not respond. Please wait a few minutes and refresh this page.